In studying the effect on the V=O stretch of adding other ligands trans to the V=O bond, acetyl acetone (acac) is often used as a ligand. This is a bidentate ligand which forms a complex VO(acac)2 (shown in Figure 1) ...

Why does the position of the V=O stretch in the IR spectrum change as other ligands are added trans to the V=O bond? What does this tell you about the electron donating properties of the N-donor ligands and their relative strengths?

In studying the effect on the V=O stretch of adding other ligands trans to the V=O bond, acetyl acetone (acac) is often used as a ligand. This is a bidentate ligand which forms a complex VO(acac)2 (shown in Figure 1) in which two weakly aromatic rings are formed, effectively blocking the positions cis to the V=O bond from further substitution. 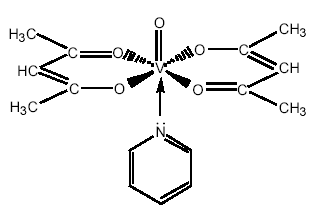 Addition of pyridine (Py) trans to the V=O bond, to form VO(acac)2Py (also shown in Figure 1) causes a change in the frequency of the V=O stretch from 997 cm-1 in VO(acac)2 to 965.3 cm-1 in VO(acac)2Py (Nyquist & Kagel, 1996). This is due to the co-ordinate bond formed between the lone pair of electrons on the nitrogen and the empty d-orbital of the vanadium. This increases the electron density around the vanadium, resulting in repulsion of the V=O bond. This repulsion causes the V=O bond to lengthen and therefore weaken, resulting in a lower wavenumber for the V=O stretch. Other nitrogen donor ligands, such as piperidine, have a similar effect in reducing the wavenumber; however, in the case of piperidine, the reduction is lower (Nyquist & Kagel, 1996). This is because pyridine has a higher electron density than piperidine, due to the aromatic ring; it therefore causes a greater increase in the electron density around the vanadium and hence a greater weakening of the V=O bond (Suzuki & Orvilelle-Thomas, 1977). Addition of an oxygen-donor ligand in the trans position also causes a reduction in the V=O wavenumber; however, this is much smaller, in the region of 5-10 cm-1 (Larsson, 1972), demonstrating that oxygen is a weaker electron donor than nitrogen.